In this week’s recap: U.S. and U.K. see financial turbulence.

U.S. stocks were under pressure all week due to recession concerns and unsettled trading in the bond and currency markets. This stress followed economic steps out of the U.K. During the previous week, the Bank of England (BOE) raised interest rates, and its prime minister announced unfunded tax cuts that the markets interpreted as inflationary.

THE BANK OF ENGLAND ACTS

Global bond and currency markets have been volatile recently due to global central bankers raising interest rates to combat inflation. Developments in the U.K. took center stage last week when the BOE announced it would be buying long-dated U.K. government bonds. Upending the financial markets was the previous week’s announcement of tax cuts by the country’s new prime minister, a step many investors viewed as counterproductive to the BOE’s inflation-fighting efforts.

If you’re shopping for a homeowner policy, feel free to ask for a discount. If you can demonstrate that you are taking steps to reduce risk, you may be able to negotiate one.

“The trust of the innocent is the liar’s most useful tool.” 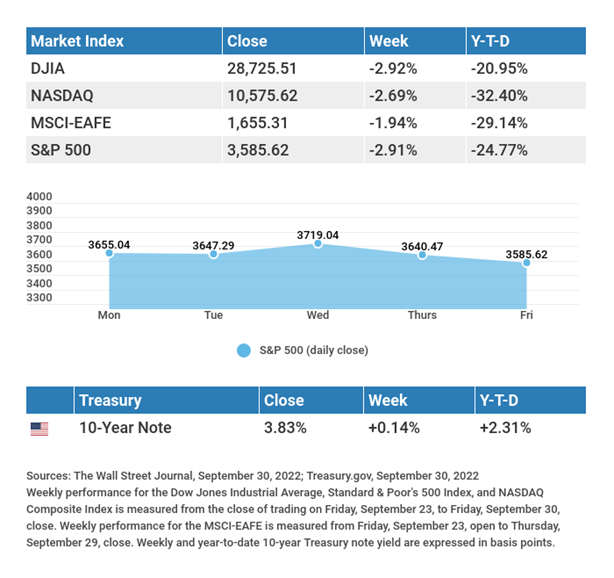 Seven people stand in a square room which measures 30' x 30'. Each one can see the entire room and everyone in it without making any physical movement (aside from eye movement). Where inside this room can you place an apple so that all but one person can see it?

LAST WEEK’S RIDDLE: Alexandra’s mom had four children. The first one was named May, the second was named June, and the third was named August. What was the fourth child's name?