In this week’s recap: Fallout from Powell comments continues.

Last week’s meeting of the Federal Open Market Committee (FOMC) proved unsettling for the financial markets. It wasn’t only the widely expected announcement of another rate hike but a more hawkish message that rates may be heading higher for longer than anticipated. Fed officials indicated that any policy change might be further off than investors had contemplated.

The latest rate hike caused bond yields to rise, with two-year and ten-year Treasury note yields touching levels not seen in over a decade. Global central banks moved in tandem with the Fed, as the Bank of England, Swiss National Bank, and Norway’s Norges Bank, among others, also hiked rates.4,5

In its effort to cool inflationary forces, the Federal Reserve raised interest rates by 0.75% last week—the third consecutive rate increase of that size. Projections by FOMC members suggested that interest rates may increase by as much as 1.25 percentage points before year-end.6

The FOMC also projects that unemployment will rise to 4.4% by December 2023. This projection is up from its current level of 3.7%, and that core inflation will be 4.5% by year-end. In June, Fed officials projected core inflation would be at 4.3% by year-end. They also indicated that interest rates may reach as high as 4.6% in 2023, without any rate cut likely until 2024.7

T I P   O F   T H E   W E E K
Never leave money on the table when it comes to your workplace retirement accounts. If your employer offers to match contributions, strive to contribute enough so that you get the match.

“People are like stained-glass windows. They sparkle and shine when the sun is out, but when the darkness sets in, their true beauty is revealed only if there is a light from within.” 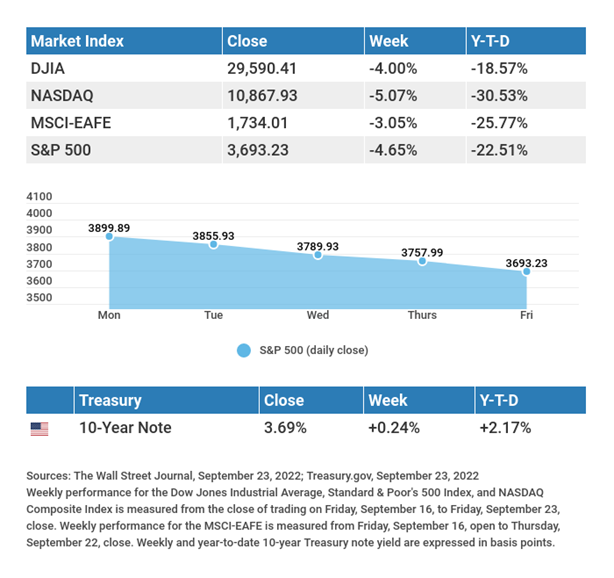 Alexandra’s mom had four children. The first one was named May, the second was named June, and the third was named August. What was the fourth child's name?

LAST WEEK’S RIDDLE: We all have one, and even though it often demands an answer, it offers no question. What is this everyday item?